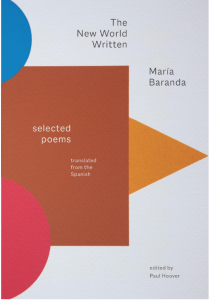 The first collected edition in English of poems by Mexican poet María Baranda, this volume features work from twelve separate poetry collections spanning the full trajectory of the poet’s literary career. The book invites readers to follow Baranda over time, and in the voices of eleven different translators. Yet even amid this polyphony of translators, Baranda’s voice is distinct, marked by formal restraint.

In Baranda’s poetry humans merge with the natural world, as when the addressee of the poem “Dylan and the Whales” (who may be Dylan Thomas) slithers “through the underbrush / praying for the abolition of mornings.” Oceans, skies, and insects are anthropomorphized, while human beings are defamiliarized, as if we were encountering the species for the first time.

Baranda’s poetry consistently surfaces new connections between the words we use and the worlds we inhabit, as in these verses from Arcadia: “Cities that fall from my mouth / like pieces of an invented map.” In “Víbora,” we witness the poet’s imagination run wild as she contemplates a viper:

Kill her, milk her, take out all the juice.
Don’t let her slither into consciousness.
Suck her wind’s light. Drain it. Call her adverb,

verb, truncated syntax, ancient alphabet: foul-mouthed.
Lose it at the edge of her figure. Stop her.
Tell her there is no sap, nor juice, nor letter.

Throughout this collection, images jar against our expectations, as when afternoons “fall from the hand” like “stones” and the sea becomes “a lance of fear.” “Baroque lucidity” is one way of describing these poems (as on the dust jacket) but we should also note the poet’s affiliations with her classical predecessors, reaching back to Homer and the Roman poet Tibullus, who inform not only Baranda’s obsessions with nature and the cosmos, but also her wide-ranging and ambitious metaphors.