Kalevala: The Epic of the Finnish People 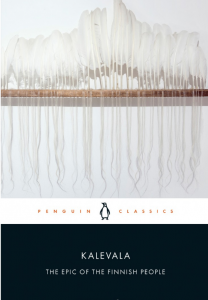 This volume is a reissue of Eino Friberg’s translation of the Kalevala, the first major published work of secular poetry in Finnish. The Kalevala was originally compiled by Elias Lönnrot, who traveled through remote areas of Karelia, Finland, during the 1800s, transcribing poems recited by rural women and men, whom he compared to the Homeric bards of Greek antiquity and to the Icelandic bards whose poetry comprised the Edda. When Lönnrot first published these poems in 1835 under the title The Kalevala, or old Karelian Poems about Ancient Times of the Finnish People, it was a watershed moment in Finnish literature. The Kalevala exists in four major English translations and has been translated into over forty-seven languages. Among the English translations, two are by scholars (W.F. Kirby and Francis Peabody Magoun Jr.) and two are by poets (Keith Bosley and Friberg). Friberg’s is the first translation by a native speaker of Finnish and the only one by a blind poet.

Friberg’s translation recreates some of the excitement that the 19th-century Finnish reader may have felt when first encountering this compilation of epic verse. As in many epics, the miracle of existence is a perpetual theme. When he is born after passing “thirty summers” in his mother’s womb, the demigod Väinämöinen is filled with yearning:

To behold the moon in heaven
And to wonder at the daylight,
Get to know the Great Bear’s grandeur
Or just to stare up at the stars.

A sense of wonder permeates every one of the fifty poems (called “runos”) in this epic tale of the adventures of four heroes interspersed with magic incantations and spells. The republication of this translation, which has been out of print for decades, will hopefully shine a light not just on the Finnish epic but also on Friberg’s extraordinary translational vision, which foregrounds the oral dimensions of the poem.