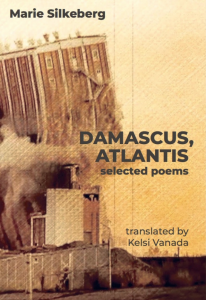 Damascus, Atlantis is a collage of poems drawn from two of Swedish poet Marie Silkeberg’s collections, Till Damaskus (2014, with Palestinian-Syrian poet Ghayath Almadhoun) and Atlantis (2017). Translated by Kelsi Vanada, the poems in this book appear alongside stills from two poem films that Silkeberg produced in collaboration with Almadhoun, The City and Snow, in which images of war are spliced with Arabic poetry recited in many voices.

The poems in this collection offer provocative entry points for an investigation of the ongoing political legacies of colonialism and the power imbalances wrought by globalization. Whereas official narratives mask over the atrocities that linger at the edges of popular memory, the poet is unflinching in her account. In the poem “De Wilde See | Léopoldville,” named for the headquarters of the Belgian Congo, Silkeberg writes, “You look at the façade of the newly built historical museum. / A small silver hand in each rust-red stone.” A few lines later, these gentle images yield to somber reflections on the high toll exacted by capitalism: “As if each object suddenly screamed out its price. / In child labor. Worn-down human bodies.”

In “Abu Dhabi | Rub’ al Khali,” an anonymous Syrian man says: “It will take a hundred years before it’s again a country to live in.” In a literary environment from which Syrian voices are notably absent, any collection that sheds light on the Syrian experience of war is welcome. And yet, it is troubling that the process of bringing Silkeberg’s Swedish poetry into English appears to have involved the erasure of Almadhoun, who, aside from obligatory copyright notices, is nowhere mentioned in this work.

The poet’s searing observation that “Oil is the answer to almost every question” looms over the geopolitical shape of this collection’s poetics. As she moves from colonial amnesia to a fierce indictment of colonial rule, Silkeberg shows us what it means to inhabit today’s globalized world.