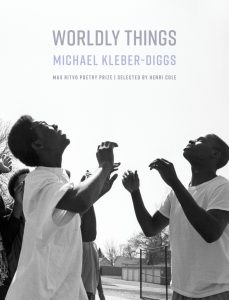 Worldly Things by Kleber-Diggs embraces the wondrousness of everyday existence. In “Ars Poetica,” the speaker recounts a driving lesson with his daughter, whom he briefly addresses at the end of the poem: “You are the kind of artist I want to be. She does / not look at me. She keeps her eyes on the road. She makes // the window a mirror, meets me there instead.” In this moment of father-daughter bonding, the speaker sees his artistic vocation mirrored in his daughter’s careful driving. While the scene—a father teaching his daughter how to drive—is commonplace enough, Kleber-Diggs’ poem reveals the beauty in the seemingly mundane, in the pride a father takes in his daughter’s simple achievements, but also the way he learns from her, as parents often learn from their children.

Poems of joy and celebration co-exist with elegies in this collection. In “After You Left,” the death of the speaker’s father is compared to “a planet / orbiting what might have been.” In the next poem, we learn exactly what happened: the speaker’s father was “shot / and killed in his office” in 1976. These details are being shared with a purpose: so that the reader—and the speaker’s brother, who is the addressee of the poem—will understand the routine violence faced by “black boys in a white city.”

In the book’s title poem, the speaker assembles a range of objects—among them “two batteries,” “a knife,” and “an empty oatmeal can”—all things “meant to survive me.” Although the most immediate implication of “survive” is outlive, the verb also underscores that writing is itself an act of survival, a means of getting along in a universe that mixes joy with grief.