The Translator of Desires 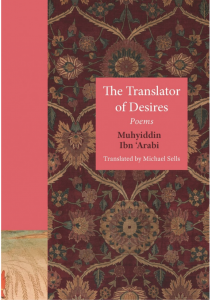 Michael Sells’ English rendering of Ibn Arabi’s Translator of Desires is the latest in a series of Sells’ translations of the Arabic classics, and the first complete English translation of this 13th century masterpiece since the 1911 version produced by British Orientalist Reynold Nicholson. While Ibn Arabi’s poem sequence has long been theorized and studied as a work of philosophy, Sells’ translation foregrounds the poetic qualities of the work, and of its Arabic, offering a welcome new perspective on this medieval classic.

Ibn Arabi’s allegorical poem sequence revolves around a series of imaginary encounters between the poet and his Iranian beloved, whom he meets while visiting Mecca. Their love is never consummated, and the two become “Opposites never / to be joined—.” Ibn Arabi’s rhapsodies will remind the reader of Dante’s Beatrice. As Sells notes, the poem cycle “consists of ever-repeated acts of reenchantment as the beloved is brought back to the present and the withered world is revived.”

Sells is bold in his translational methodology, especially when he departs from the exact lineation of the Arabic verses. While English uses an accentual metric system of fixed syllables, Arabic meters are determined by the pattern of long and short syllables in a given verse. In order to avoid creating a monotonous effect in English, Sells breaks his lines at shorter intervals. As a result, single lines in the Arabic original become two, three, or four lines in English. Sells’ choice pays off: these verses are more striking when the Arabic line is broken more frequently:

Put down your flint,
fire-striker
Here is passion’s fire
Take an ember

Aside from his prosodic innovations, Sells hews closely to the original. His adventurous and insightful rendering gives a new sense of concreteness to Ibn Arabi’s mystical verse.