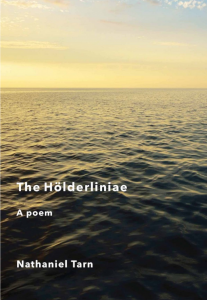 The tortured verse and tragic life of the German Romantic poet Friedrich Hölderlin (1770–1843) are the inspiration for Nathaniel Tarn’s latest work, The Hölderliniae. For Tarn, Hölderlin is a poet who was “slowly murdered,” who “lived and died among the dying,” while suffering from debilitating mental illness during the final, tragic decades of his life. Through this hybrid epic, which incorporates Tarn’s own translations of Hölderlin’s poems, the poet invites readers to find ecstasy in the loneliness of the human condition and to reexamine our thinking about language, mortality, space, and time.

The book opens with a prose introduction to Hölderlin, whom Tarn calls “the First Modern Poet to many cultures in the twentieth century and beyond.” Like Hölderlin’s famously challenging hymns, which pushed German in new directions while speaking from another time, Tarn disrupts English prosody and inverts syntax to evoke a world that is at once distant and hauntingly familiar. The thirty Hölderliniae, or hymns, that comprise the book oscillate between poetry and prose as they channel Hölderlin’s voice from beyond the grave.

This work reveals to us Tarn, who taught anthropology and then literature until his early retirement in 1985, an ethnographer of the past whose fieldwork is located in the realm of the imagination. With Hölderlin as his guide, yet speaking in an idiom reminiscent of Walt Whitman, Tarn pursues the “meeting place between yourself and the attempted tasks / that must be done right there and nowhere else.”

Tarn’s bibliography attests to the work that went into crafting this recasting of German Romanticism’s most abstruse poet in contemporary English. This small miracle of verse obsesses over the singularity of the moment, which is also the singularity of human existence. Every stanza insists—and ultimately persuades us—that “Death has a thousand cards to play. Life only one.”

If you’d like to support my work, you can purchase Tarn’s book through either of these affiliate links: Bookshop and Amazon.com.