Rafik Schami believes everyone is an artist 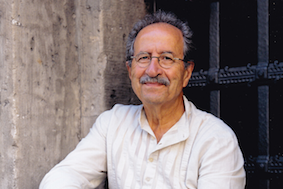 “The crucial question was not one of courage or cowardice, but of might and power in the state,” says the narrator of Rafik Schami’s novel The Calligrapher’s Secret.

Cover for The Calligrapher’s Secret (2011)

Schami (b. 1946) is a Damascus-born German-Syrian writer who migrated to Germany in the 1980s. His storytelling method is heavily influenced by the Arabic narratives in 1,001 Nights and his novels demonstrate a deep knowledge of Islamic history and an inventive approach to the past.

The narrator who warns of the power of the state in The Calligrapher’s Secret is channeling Rami Arabi, father-in-law of Hamid Farsi, master calligrapher of mid-twentieth century Damascus.

To the novel’s end, Farsi is a mystery. The master calligrapher sacrifices himself and everyone he knows for the sake of craft, leaving the reader guessing whether his sacrifices are noble or in vain. The difficulty of judging Hamid Farsi brings us to the novel core mystery: the relation between art and life and the debt these two spheres of experience owe each other.

Read in terms of its plot, The Calligrapher’s Secret narrates a rather simplistic tale: older man marries younger woman. The new bride hates her husband and falls in love with his youthful assistant. The bride is Muslim and her new lover is an impoverished Christian in a Muslim-majority society.

So far, stereotypes prevail. The youthful assistant and new bride escape to Damascus, and set up a new life in Aleppo under assumed names. The jilted husband, furious with jealousy, kills the only man he can blame for his wife’s desertion, a former customer for whom he had been writing love letters addressed to his wife.

Unaware that he has killed the wrong man until it is too late, Hamid Farsi is given a lifelong prison sentence. He serves this sentence in a special cell allotted to him by the prison governor who happens to love the inmate’s calligraphy. Farsi practises his art in peace until a regime change results in his expulsion from his special cell and his confinement with violent criminals.

Driven insane, Farsi is transported to a psychiatric institution, from where he disappears from the narrative, having either escaped to Istanbul and become a millionaire calligrapher, or died in the asylum, as the caretakers who denied his escape claim. We never find out for sure. The novel is deliberately — and tantalisingly — ambiguous concerning the circumstances of Hamid Farsi’s death (if indeed this magical calligrapher ever dies). 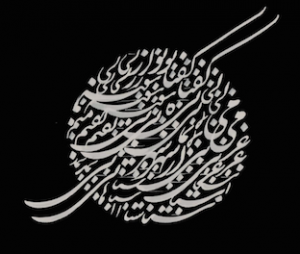 But it is not the plot that makes The Calligrapher’s Secret worth reading. What remains with the reader long after finishing the book is the way art intervenes with life. Nearly everyone in Schami’s novel is at least potentially an artist. Nearly everyone is capable of losing their mind in otherworldly passions.

The real hero of The Calligrapher’s Secret is not in fact Hamid Farsi, for whom the novel is named, and whose actions drive the plot. Rather, the novel’s towering figure, as well as Hamid Farsi’s personal hero, is Ibn Muqla (886–940), executed in Abbasid Baghdad for his bold attempts to reform the Arabic script. Before his execution, Ibn Muqla established a proportional writing system based on the geometric coordinates of the circle that transformed the future of Arabic writing.

In order to carry out his plan, Ibn Muqla studies Persian, Aramaic, Turkic and Greek. He researches in detail the transformations undergone by the Arabic script from its inception to the tenth century. The frame story reports anachronistically that Ibn Muqla aspired to graft the letters P, O, W, and E onto the Arabic alphabet, and thereby to facilitate the transliteration of Persian, Japanese, Chinese, and Latin words into Arabic. Whereas Ibn Muqla was killed for grafting the letters P, O, W, and E to the traditional Arabic script, Hamid Farsi communicates to the Syrian government his ambition of instituting these same reforms a millennium later.

There is one important thing that the book does not tells us: Ibn Muqla was a Persian native of Shiraz. Like so many Persians from this city, he rose high in Abbasid administration, and served as vizier to no less than three Abbasid caliphs. Ibn Muqla’s origins deepen the parallels between him and his modern counterpart. Hamid Farsi, whose very name means ‘The Praised Persian’ is himself of Iranian origin. He was forced to flee with his father at the age of four to Damascus from Iran, where his sister and mother had been murdered “because someone had informed on his father for sympathizing with a rebel Sufi sect.” This association between calligraphy and heterodoxy repeats the precedent set by Ibn Muqla, who studied all the languages of the world in order to arrive at a more perfect alphabet.

This is one of the many repetitions that structure The Calligrapher’s Secret. Collectively, these they suggest that, in this work, life moves according to the rhythm of art.

The last word is given to Salman, Hamid Farsi’s young Christian assistant who ran away with his master’s wife. After Hamid’s disappearance from the world of the living, Salman becomes the master calligrapher. His secret plan, like that of his predecessors, all of whom were tragically executed, is “to devise a new kind of calligraphy in Arabic script” consisting of “characters of a clarity that would make reading easier, show elegance, and above all breathe the spirit of modern times.” Such repetitions suggest that all the calligraphers in this novel are trapped within repeating patterns. Their passion for reform brings about their inevitable demise.

While Farsi fails just like Ibn Muqla had failed centuries earlier, his dreams resonate within the novel like visions from another place and time. “Hamid Farsi was a prophet,” says an old friend of the Damascus calligrapher towards the novel’s end. This friend alludes to the narrative principle that structures Schami’s story and shapes his chapter titles. “A prophet in Damascus ends up as a rumour,” the storyteller continues, “We attack and persecute our prophets.”

“We attack and persecute our prophets.”

The ultimate fate of Ibn Muqla’s proposed reform of the Arabic script remains opaque by the novel’s end. While Ibn Muqla was executed and Farsi simply disappeared, Salman, who escaped with his master’s wife, remains free.

And yet, ironically, it is in Salman, and, even more literally, his offspring, that Farsi’s dream lives on. Although Sarah (Salman’s and Noura’s only daughter), is not genetically related to Farsi, she mirrors him in many respects. At the novel’s end we learn that Sarah became a famous calligrapher.

Such, Schami suggests, is art’s relation to life: it recapitulates figuratively the dreams we perpetually imagine but which we are not fated to live.