Testimony: Found Poems from the Special Court for Sierra Leone 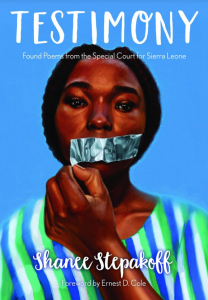 Shanee Stepakoff’s Testimony is an extraordinary assemblage of “found poems” taken from the official transcripts of the war crimes tribunal established by the United Nations and the postwar Sierra Leonean government to assess and document the trauma inflicted on innocent civilians during the Sierra Leone Civil War (1991–2002). In a detailed introduction that also serves as a guide for how to read these poems, Stepakoff, who worked as the court psychologist for two years, tells of being traumatized by the stories she encountered and of turning to poetry in order to process her verbal paralysis. By recasting the testimony of survivors in poetic form, Stepakoff reveals the poetry in their words, as in the opening lines of the poem “The Rape Survivor”: “I’m not married. / I have no children. / I never went to school.”

Stepakoff is acutely conscious of the ambiguities of her authorial positioning and insists on her “responsibility to revive the voices that are at risk of disappearing.” In this sense, she might be considered a translator from the medium of speech to the page, rather than between different languages. By introducing line breaks, anaphora, and other literary devices, Stepakoff makes us see the urgency in these words of testimony:

In the graveyard
we were told
that if anyone in your family has died,
whether it was your grandfather
or any other family member,
his spirit will come
and give you something—
something not of this world—
which will make you very powerful to fight.

At once astonishing and devastating, these poems attest to poetry’s ability to bear witness to atrocity, while the poignant cover image by Liberian American artist and war refugee Papay Solomon reminds us of those whose voices have been silenced for too long.

You can support my work and the author (at no additional cost to you) by purchasing the book through my affiliate links at Bookshop or Amazon.com.