The Wild Fox of Yemen 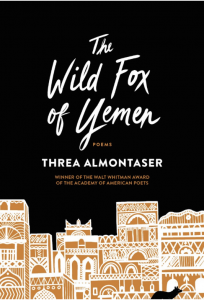 In her debut collection, The Wild Fox of Yemen, Threa Almontaser celebrates her foreign roots through imagery, lexicon, and script. Almontaser’s commentary on hayat (حياة), which means “life,” is central to this aesthetic. “Hayat in Arabic is to respect the self”—the poet declares in “Guide to Gardening Your Roots”—“which is to respect my forest, my mountain, my wells.” Although suffused with Arabic and Yemeni cultural references, these poems are unmistakably American in their idiom, and in their vivid portrayal of a girl coming of age in Yonkers, discovering her sexuality and her female body, trying to live a normal life after 9/11, and dancing to the hip-hop group The Fugees.

Poets like Solmaz Sharif and Aria Aber have experimented with incorporating their native languages into their English poems, but Almontaser takes this practice to a new level. The book’s three sections are marked—like the poems themselves—with the Indian numerals used in Arabic, and many of the poems incorporate Arabic script, with Arabic collocations often left untranslated. The collection also includes translations of poems by the Yemeni poet Abdullah al-Baradouni (d. 1999). Interspersed throughout are photographs of Yemeni men and women—presumably the poet’s family—with their eyes scratched out.

One of the collection’s most striking poems, “Muslim with Dog,” boldly revises the stereotypical cultural opposition between Islam and dogs. “There is another / murtah by a fireplace, head on someone’s knee as they’re stroked,” the poet says, using the Arabic term for apostate to describe the dog. As ironies proliferate, the dogs in the poem become ever more endearing and ever more human.

While Almontaser’s hybrid poetics enriches this work immensely, the visual feast of scripts, languages, and cultures generated by these poems yields a reading experience that is at once more political and more personal. Readers will connect with the young woman at the center of this collection, who wears her “city’s hatred as hijab.”

If you’d like to support my work, you can purchase Almontaser’s book at a discount through either of these affiliate links: Bookshop and Amazon.com.