The Beginning of Water 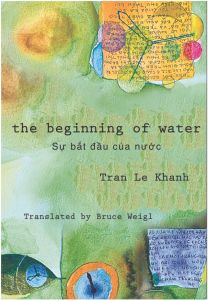 Tran Le Khanh’s poems, translated from the Vietnamese by the author and Bruce Weigl, introduce us to a temporality at many removes from the fast pace of everyday life. Inspired by Buddhist teachings, these poems, most of them consisting of just four lines, point to a poet who, as Weigl notes in his preface, has found in his verse “a way to offer true expression of the Dharma.”

The poem “process,” which can be read as a poetic manifesto, asks the reader to observe the passage of time:

spring
drops itself
several times
onto a single bud

For Tran Le Khanh, every moment is sacred and demands our attention. Such a poetics is well-suited for rendering the fleetingness of our worldly existence, as in the poem “fragile”:

While most of the poems offer little by way of explication, and instead ask the reader to do the work of interpretation, some are accompanied by titles that serve as metacommentary. In other cases, the poem seems to function as a gloss for an otherwise cryptic title. One such is the poem titled “already across the river he carries the boat on his shoulders.” It reads in full:

While the title presents the scene as if in medias res, without any context, the poem itself offers what might be an abstract distillation of the anonymous man’s perspective, or inner world.

Through such delicate miniatures, this collection breathes new life into quotidian minutiae—rain, sun, wind, leaves on trees—we might otherwise take for granted.