The Death of Bagrat Zakharych and Other Stories by Vazha-Pshavela (London: Paper & Ink, 2019).

Of this book, Calvert has written:

In Georgia, people refer to Vazha Pshavela as just “Vazha”, underlining his centrality to the country’s literary canon. In The Death of Bagrat Zakharych and Other Stories, which includes three short stories and one epic poem translated into English for the first time, Pshavela, born in 1861, explores glory, courage, masculinity and honour, tropes that can be traced back to the origins of Georgian literature. With her new translation, Rebecca Ruth Gould follows in the footsteps of Russian literature luminaries like Osip Mandelshtam and Marina Tsvetaeva, who translated Pshavela’s classic works.

You can download the full book here for free. 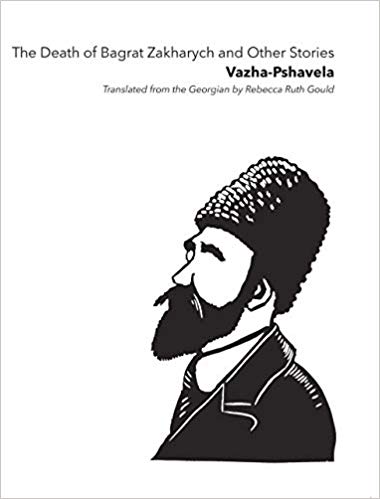 “Gogotur and Apshina” (1886) is one of Vazha-Pshavela’s legendary epic poems. A moving rumination on the themes of military glory and courage, it was translated into Russian on three separate occasions by Russia’s greatest poets: Osip Mandelstam, Marina Tsvetaeva, and Nikolai Zabolotsky.

“Memories, a Christmas Tale” (1888): A boy who passes his childhood at a faraway boarding school returns home during the winter vacation. As he reconnects with his family, a hunting expedition with his uncle changes his perspective on life.

“The Death of Bagrat Zakharych” (1889): A sardonic account of the sudden death of a chancellery official, the story reveals Vazha’s irony at its fullest pitch, and invites comparison to such classic works as Melville’s “Bartleby, the Scrivener” and Tolstoy’s “The Death of Ivan Ilyich.”

“Batura’s Sword” (1913): A transfixing account of a magic sword that haunts the people of Pshavi following the death of its owner. The sword carries the plot in this text that mixes the magic of the Caucasus mountains with a tale of honour on the battlefield.